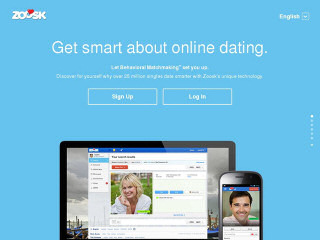 Zoosk, established in 2007, claims to be the world's largest global dating community. Most features require payment in the form of a subscription or Zoosk coins. As a teaser, they offer a free upgradeable account that allows limited access to several features.

If you're comfortable with sites like Facebook you'll find yourself right at home at Zoosk, just expect to pay for the privilege!

It offers options to use your Facebook profile photo as well as your music, movies, books, and TV show likes which can save a bit of typing.

You will have the option to upload a profile picture (must be a headshot), your likes, text about you, basic details, and what you would like in a potential match. They also have a feature that allows you to ask friends to write a testimonial that will be uploaded to your profile. 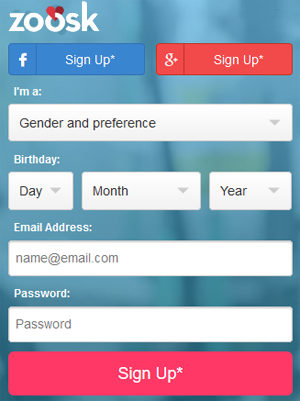 An additional aspect is the icebreaker question section in which you can choose from several questions so that other members will have something to respond to if they aren't sure what to say. Most aspects of the profile creation stage can be skipped and returned to later.

This version will allow a member to establish a profile, use the search feature, and make and receive initial contact with other members. It is a convenient way to see if there are any interesting potential matches in your area, but nearly impossible to use as a means of real contact unless the account is upgraded to a paid version.

The paid version allows full access to all features on the site, although certain items and features will need to be purchased with "coins" that can be bought for an additional fee or earned through various surveys and other options.

Most keep their messages short and have images that don't look like they were cut straight out of magazines.

Zoosk moderates any images and text before they are posted to the website. Inappropriate or blurry images as well as contact information will not make it through the approval process which can take anywhere from a few minutes to a few hours.

As for security, while Zoosk can be utilized through social media sites like Facebook, it will not let other members have access to your Facebook page through its features. However if you do link to another account, do ensure that you fully understand exactly which data will be imported into your Zoosk profile, and of other aspects such as automatic "friend notifications" or information that may be posted on your "wall", before you proceed.

The profiles seem genuine for the most part. Most keep their messages short and have images that don't look like they were cut straight out of magazines (no that isn't code for they're all hideous).

Have you ever wanted to hear "You're not popular" from a faceless website? Well, you're in luck.

The site is fairly active, so if you flirt with others chances are they will flirt back. Since Zoosk essentially sells positions in the front of the search your profile will not be immediately sent to the front for being new, so an avalanche of messages won't arrive the first day you sign up unless you initiate contact yourself. 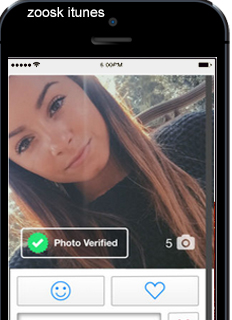 Boosts: Have you ever wanted to hear "You're not popular" from a faceless website? Well, you're in luck. The site will regularly inform you of your popularity ranking which will be around 6,423,753 when you first sign up.

Their solution? Buy "coins" (a form of site credit) and pay for a "boost" to get your profile onto the first pages of the search.

Text message alerts: If you would like free alerts sent to your mobile phone they offer a text message service that will send you notices when anyone tries to contact you through the site.

Messenger: Zoosk offers a downloadable messenger to connect, text chat, and video chat with other members. The messenger also provides popup notices when you have activity such as a wink or a new email. Members that have a free subscription will find out that they will not be able to see the messages sent to them and can't send any in return. If a free member gets a message, the screen will show that the message was sent and suggest upgrading to read it.

With coins you can purchase add on features such as boosts, and sending your messages with priority.

On-Site email: This feature allows for sending messages back and forth between members. Members with free accounts may only send one message to each person, may only read one message from each person, and may find that if the message they receive from someone is long that the site will only show a preview of the first few lines.

For an extra fee (site coins), you can choose to find out if your message has been read or you can have it so your message stands out as a popup instead of potentially getting lost in the other person's mailbox (this could give the other person the impression that you're just a bit "desperate").

Winks, gifts, and friendship: Winks can be sent freely between all members. Virtual gifts need to be purchased with "coins" and can be sent along with a message by both free and paid members. Friendship is free, as it should be, and can be offered and accepted in the same manner as any social networking site.

Forum: Forums are usually a great way to met people without the stress of admitting right away that you might think their profile is entirely groovy. The Zoosk forum is not exception to this rule and has quite a healthy archive of messages. The downside is that it is currently inactive and has been for several weeks at this point. Maybe the moderator went on vacation and quit bothering to approve posts?

Find out who viewed your profile: This feature is pretty self-explanatory and is available to paid members.

ZSMS: The Zoosk's Scientific Matchmaking Service (ZSMS) is a survey supported compatibility program based on questions regarding member's preferences in several categories including if they would accept a match that has children, what age they would like their match to be, religion, ethnicity, and more. It is essentially a version of the expanded search features already available on the site.

The Search: The basic search will show you men or women within a certain distance of the location you've set on your profile. Much like the ZSMS options, the extended search will show matches based on location, age, appearance, religion, ethnicity, if they have children, previous or current marital status, and a few other basic-to-all-dating-sites options.

The under 20's crowd effectively use their own separate area of the site.

Apps: There are Zoosk apps available for iPhone, Facebook, MySpace, Bebo, and Hi5 in addition to Zoosk's stand alone messenger and text messaging alert features. The apps act like a "Facebook for dating" in that they will show you the recent activity, such as updated pictures or profiles, of potential matches in your area.

Coins: Coins are an additional purchase separate from membership fees. They can be bought or earned through various survey. With coins you can purchase add on features such as boosts, sending your messages with priority features, and virtual gifts. Zoosk is currently offering 17 free coins for liking their Facebook page; coincidentally it takes 20 coins to get a profile boost.

Is Zoosk Worth the Effort?

It is an effective site for meeting others and the people for the most part are friendly and open. If you are comfortable with sites like Facebook you will find yourself right at home at Zoosk, just expect to pay for the privilege.

Total 81 Ratings
16 Reviews
65 Comments
Rss Feeds. Subscribe to comments for this site. [?] Receive updates about Zoosk.com directly through your newsreader.
Sort By: Filter By: Rating:
Page 1 of 5

Related Articles
Zoosk 1.48 81 A review of Zoosk. Zoosk, established in 2007, claims to be the world's largest global dating community. Most features require payment in the form of a subscription or Zoosk coins.
Home ›
Reviews ›
Popular ›
Zoosk