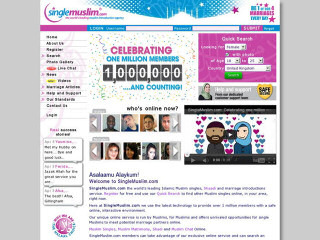 "Full of weird girls and guys"

So, whenever you do a search for Muslim dating, this site turns up first. I wonder why but then again, advertisement means business, so I guess they spend a fair share on it. A friend had recently joined and she was going out with a guy that evening and told me about it at work. And she said itâ€™s this website where guys want to get married and not just keep dating. So I though well, letâ€™s see. The next morning she said, the guy was a jerk, but she didn't lose heart.

I must admit, my brother and I both made profiles on this website as we were both seeking serious marriage proposals. My brother had to pay for his account. What we both found is that the kind of people you would want to marry cannot be found on the website, rather you will come across some funny, weird, psychotic people with some realllllll issues in life. Most women are divorcees at very young ages and most men are too. Then there are some girls who had actually told my brother, they want their own house, a lot of jewellery in the wedding as they want their dream eastern wedding. Well, wake up girls, times have changed and all that does not come for free, at least not when you hardly know someone and meet them through internet.

As for men, they are usually only there to chat, have a few dates, and some are with agendas that are beyond me.

SingleMuslim.com Reviewed by ChiChi on Jun 11. So, whenever you do a search for Muslim dating, this site turns up first. I wonder why but then again, advertisement means business, so I guess they spend a fair share on it. Rating: 1
Home ›
Reviews ›
Muslim ›
SingleMuslim.com ›
User Reviews ›
ChiChi