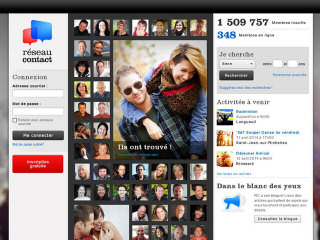 "The least exploitive of all the two tiered dating sites"

Fees start as low as $5 (via a cellphone account) for a 2 day subscription to $20/mo. and $10/mo. or lower pricing for multi-month subscriptions and promotions. The search engine is so powerful it can be used by statisticians to conduct demographic studies on subjects such as fertility, social attitudes on religion, scholastic achievement, sexuality, income, and self-esteem using binary search parameters.

The site has become a bit of a French Canadian national monument with it making a cameo appearance in one episode of the popular television series called C.A. A significant percentage of the Quebec population has passed through the web servers of this site at some point in time.

During the last 10 years, I personally have met over a hundred members on this site and have had 4 great successes including a common-law wife. Unfortunately, there are no structural features that would allow non-french speaking members to seek out like members. The english site called Lavalife was a spin-off originally from ReseauContact and is more exploitive in its policies.

Plenty-Of-Fish serves the Quebec market of french and english users but POF has many structural flaws in its search engine and matching tools. To me ReseauContact remains the benchmark in dating site design and fair exploitation.

Reseaucontact Reviewed by almost_elvis on Sep 1. I define an exploitive dating site as one which offers free and paying memberships and also requires that one pay in order to read messages and will not allow a member to publicize their membership status and will not reveal the ratio on paying to non-paying members. Rating: 5
Home ›
Reviews ›
Canadian ›
Reseaucontact ›
User Reviews ›
almost_elvis