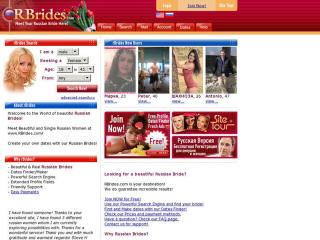 This site offers introductions to attractive, single Russian women who are seeking marriage or a long term relationship with men from the USA and Europe. RBrides.com charges men a basic membership fee in addition there are charges for communicating with females on the site.

Rbrides.com is matchmaking service for English-speaking men who dream about the refined souls of Russian women. This site helps these curious and yearning men transform that dream into a reality.

What attracts people to RBrides?

It's hard to say why Russia has fascinated the West for so long. Perhaps it is due to the long political enmity between Russia and the West, which has persisted throughout most of the 20th century.

Whatever the reason, Rbrides.com is an effective way for romantically-inclined Western men to become acquainted with women from Russia and other Russian-speaking countries.

Upon joining, new members can create a personal profile and then browse through a database of thousands of fascinating Russian ladies. Advanced search tools help narrow the search.

As with nearly all foreign marriage agencies, men have to pay to contact females.

Compared to others, the cost of RBrides is reasonable. A 1-month starter package can be purchased for $28.95. See the full price/services list here.

Visit RBrides.comWrite a Review
No ratings yet

Total 0 Ratings
0 Reviews
0 Comments
Rss Feeds. Subscribe to comments for this site. [?] Receive updates about Rbrides.com directly through your newsreader.
Sort By: