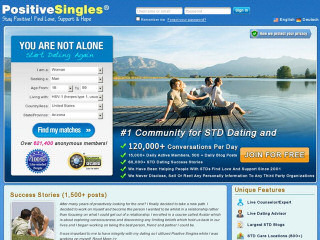 "Active forums, not much else"

This is a niche STD dating site, which is good if you aren't comfortable with the more mainstream dating sites or just tired of meeting someone, only to have "the talk" and deal with the inevitable rejection. Functionality is standard although it would be nice if you had better search options as a free member; the paid (or Gold members) have access to most of the useful tools on the site.

Positive Singles (henceforth POS) members tend to be from the HSV (herpes) demographic; while I just have HPV (human paploma virus) there weren't many women in my situation. While there were a fairly active group of folks on the boards, I wasn't there to chat; I was there to meet someone (preferably in California). In the three months I was a Gold member and the several when I was a guest, I saw very few new members join. For a flat $30 a month, you'd expect a little more; would've been even nicer if they gave you tiered pricing if you signed up for six months or longer.

They don't have a problem with scammers or fake profiles like you'd find on other sites, but the one case I had was handled extremely poorly by the admins. Heck, even the boilerplate cut/paste autoresponser emails I'd receive from Match.com were better. So, for the premium I paid, I'd expect better service. Members are encouraged to self-police and look for fake profiles and would give you one month free membership (but isn't that management's job to monitor these things?).

I sent a few emails out, but I (and the members I saw) were very selective in who they wanted to meet. This is understandable, however for the money and time invested I would have to say "pass" on this site. However, your experience may differ but POS wasn't a success for me.

Related Articles
PositiveSingles.com Reviewed by chris88008 on Jan 11. This is a niche STD dating site, which is good if you aren't comfortable with the more mainstream dating sites or just tired of meeting someone, only to have "the talk" and deal with the inevitable rejection. Rating: 2
Home ›
Reviews ›
Health Conditions ›
PositiveSingles.com ›
User Reviews ›
chris88008