Plenty Of Fish is one of the world's largest free online dating services, and is also one of the most popular social communities in the world by number of visitors. It has its strongest following in Canada and the U.S, but is growing in the UK and other parts of Europe.

POF claims 30 million registered users worldwide with about 200,000 logged in at any given time.

POF may have lost a few people to newer rivals such as Tinder but it's still big by any standards. Estimates of the number of users active on there (not just registered) is likely to be around 2.2 million. This still makes it one of the most popular dating communities in the world.

PoF highlights being a free site; however their lack of funds does mean navigating around extra advertisements for other dating services. They offer a full array of options including free messaging for the non-paying customer, with a few extra perks like being on the front page for those willing to pay. 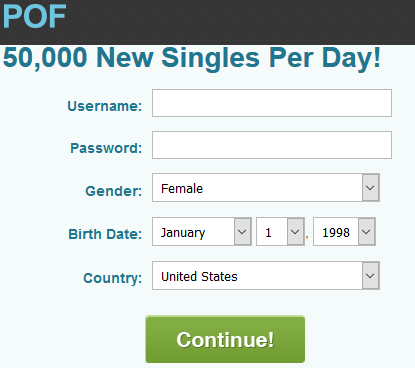 Regularly on editor's top pick lists, those at Dating Site Reviews have awarded the site a badge of honor since "2009".

In their latest review they say "Don't let the nonexistent price tag fool you - PoF is a fully functional site with every feature you would expect from a dating site (plus a few fun bonuses)."

Expect to spend a fair amount of time filling out forms

In short, PoF strives to provide all (or at least most) of the features you'd find on pay sites, without the price tag.

PlentyofFish has increased their security early in 2011 due to several hacker attacks. This means the sign up process is a bit of a pain. They require you to choose a password that is so complicated that you're bound to forget it. If you think your usual assortment of passwords is good enough think again or you will be facing the "your password is too weak" page on more than one occasion.

Also, pray that they don't think your IP is from one of the countries they have banned. It took my borrowing a friend's computer to get signed up because for some reason PlentyofFish was convinced I was located in a banned African country 3,000 miles away from my current location.

Once you do manage to get signed up expect to spend a fair amount of time filling out forms ranging from basic profile questions to a chemistry test. In addition, the site requires new joiners to upload a face photo or risk being banned. This might not be the best for those of us that are shy, but they do have an option to make pictures private.

So you've somehow managed to duck security, get in, and not get banned for forgetting a part of your profile. What now? You will find that PlentyofFish is a self-policing community for the most part. That means if a person has been reported for asking for sex then everyone on the site can block them simply by clicking the button that says to block those that have been reported.

The site will log you out a lot for inactivity so always save a copy of any long thought out messages before hitting the send button.

It also means that anyone with pictures of their private regions will be banned from the site. At this point, you're likely either feeling really safe or like the place is run by an overzealous prison guard, or a bit of both.

The main way to meet and contact people is through their profiles, or if you would rather get your toes wet before jumping in and accidentally telling some stranger you love them, then the active forums are for you. The crowd is for the most part friendly, honest, open, and talkative. It might be an effective way of meeting people without the pressure if you don't mind getting caught in the distance relationship trap, as it's unlikely that you will find a significant amount of people in the forums from your location.

Most profiles have at least two pictures, the basic form info, and a few lines of text that normally go along the lines of "I'm a nice guy, I don't know what to write here really so I'll just say something hopefully humorous for the next sentence or two." The form information includes children (wants/has), smoking, zodiac sign, age, religion, drug use, if they have a car, profession, drinking, marital status, and education. Things like hobbies, interests, and political affiliation are blatantly missing from the list.

The inbox is pretty self explanatory, although it does have an extensive list of options for the types of people you would like to ban from contacting you. You are allowed to send and receive in-site emails with a free account. Men on average can expect about a 5-10% response rate, with women tending to get significantly more replies to any messages they send out.

The site will log you out a lot for inactivity so always save a copy of any long thought out messages before hitting the send button. If you have a temporary lapse of brain activity there is a convenient list of date ideas (zoo, comedy show, etc) right next to the send button to help you get to that first date.

The sites allows members to instant message each other as well as send virtual gifts, although the gifts cost points that mainly only paid members will have enough of.

There are plenty of search options including age, location, what type of relationship they are looking for, height, hair color, religion, drugs (but who would actually answer yes to the "do you do drugs" question?), if they want children, and more. Interestingly thanks to the chemistry test you can also choose people based on if they are family centric, easy going, have self confidence, or if they are dependent on others emotionally.

Paid members get highlighted more in searches, can send unlimited virtual gifts, can see if their messages were read or deleted, and use themes in their profiles. You can use the site as a free member without much hassle. The perks of paid membership are just that, perks, not necessities.

PlentyofFish is a genuine, if a bit knocked around and defensive, site full of real people. It doesn't have that feeling of being packed with model photos and false profiles like a lot of others. However, it also doesn't have the depth of profiles that commercial sites such as Match.com have. It's a good way to meet people, but it might take sorting through a lot of fish to find your soul mate.

Visit Plenty Of FishWrite a Review
Rating from 315 customers

Total 315 Ratings
35 Reviews
280 Comments
Rss Feeds. Subscribe to comments for this site. [?] Receive updates about Pof.com directly through your newsreader.
Sort By: Filter By: Rating:
Page 1 of 22

Plenty Of Fish 2.23 313 A review of Pof.com. Plenty Of Fish is the largest free online dating service, and is also one of the most popular social communities in the world by number of visitors. Cost : $35.40, Active users: 2.2 million.
Home ›
Reviews ›
Popular ›
Plenty Of Fish