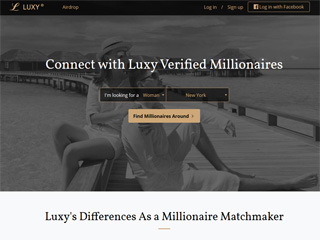 Luxy calls itself the leading dating app for the wealthy, successful and beautiful. It is an online millionaire matchmaker. And though anyone can join they do have verification available so that you can see who has had their details confirmed.

Luxy is a dating app for people of above average wealth and beauty.

The quickest way to get started on Luxy is to download their app which is available for both Apple and Android devices. After which you will have to provide some basic details about yourself.

The next step is to become a fully-fledged member. You'll need patience here because this isn't quite as straightforward as it is on Tinder.

How to Get Voted In

If you can't prove you are a "high earner" or that you have independent wealth you will need to be voted in by the Luxy community. If you get voted in, you can use the service mostly for free.

To get voted in you'll need to be especially attractive or have some exceptional personality traits that make you stand out from everyone else. Creating a good and open profile is essential otherwise you'll almost certainly be rejected for membership. 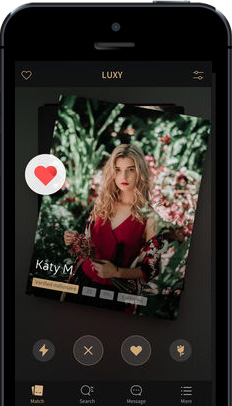 Luxy's main aim is to make romantic connections between equals rather than connections based on beauty/wealth as some of the other services do. That's not to say this doesn't go on because it would be impossible to check everyone's motive.

This community voting, they say, is to keep out gold diggers and those looking for sugar daddies. There are plenty of other places that work for these kinds of relationships, so Luxy isn't the ideal choice for that.

Their paid service is called Luxy black. This is an upgrade that gives you some extra perks and privileges. Luxy black members have more matches available to them, are allowed unlimited messing and get higher quality matches - among the most popular men and women on the service.

You will need to be voted in by the Luxy community.

Is it Worth It?

Luxy is a dating app for people of above average wealth and beauty. While there's nothing new in this, Luxy does go the extra mile to try to verify its members and to check their background stories are real. Obviously this can only go so far, so it's a case of user beware as in any dating situation.

Visit LuxyWrite a Review
No ratings yet

Total 0 Ratings
0 Reviews
0 Comments
Rss Feeds. Subscribe to comments for this site. [?] Receive updates about Onluxy.com directly through your newsreader.
Sort By: