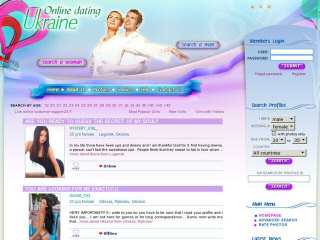 Online Dating Ukraine is a marriage agency website that lists profiles of women from Ukraine and Russia and charges men a fee to correspond with them. Browsing is free as well as sending letters (email), however men must purchase credits to open letters they receive.

A foreign bride website where you can meet women from the Ukraine.

The basic idea is the same as other foreign marriage websites. They have a catalog of very beautiful young women, mostly from poor ex-soviet countries, and men are charged a service fee for all interaction with the ladies, including correspondence, translations, and if it goes that far, an eventual meeting.

Most of the women appearing on such sites (at least the legitimate ones) are registered with a local marriage agency in their home towns. The agency, usually working on an arrangement fee, will publish the woman's profile through various channels in order to attract as much interest as possible. So don't be surprised to see the same girls on many of these sites.

If you want to use a marriage agency you need to be aware from the start of the potential costs.

This particular site has a catalog of women, mostly of Ukrainian origin. Many are wearing bikinis or sexy underwear and are photographed in seductive poses. Men can view photographs, but must pay credits to watch any videos that the girl may have provided.

It's free for men to send letters however they must pay to open letters they've received. Additionally, they must first open a letter, before being able to send another one.

Each lady's profile displays the number of credits required to open a letter from her. It's also possible to search for profiles by letter cost. The cost to communicate with each lady depends on how easy it is for the agency to communicate with her, not how popular she is.

Correspondence costs are higher for those women who don't have email access, and who live in more remote areas. In this situation there may be additional costs incurred by the agency in telephoning her or writing to her by mail.

Men who use this service need to be aware from the start of the potential costs of corresponding with females, and the costs involved in visiting her, and possibly arranging her relocation to his home country. The women listed on this site, and others like it, may not have internet access or the ability to interact with men on a typical dating site.

The main advantage of the foreign-bride sites is that they bring these women to the attention of foreign men who may be interested in them. However it's certainly possible to find attractive Ukrainian women who are more internet savvy on many of the regular dating sites.

So men need to weigh up the pros and cons of each. They also need to be aware of the potential for fraud due to the many agencies and intermediaries that are involved.

Total 20 Ratings
4 Reviews
16 Comments
Rss Feeds. Subscribe to comments for this site. [?] Receive updates about Online-dating-ukraine.com directly through your newsreader.
Sort By: Filter By: Rating:
Page 1 of 2