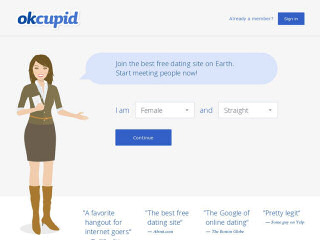 In general my recommendation is that if you want a free site that you don't go on-line -- people are not as serious on free sites as ones they need to lay down cash for. However, if you're really committed to the idea or dating free on-line (maybe you're broke, which I get) and you are definitely looking for people who are interested in dating, I've found OKCupid to be pretty decent. I had an account for several months and found some cool people on there, so maybe you'll have decent luck.

OKCupid has a couple of really really nice features on it: 1) you can pay a low fee $5-10 and avoid the pop-up ads (definitely worth it); 2) it matches you based on simple everyday questions (unlike eHarmony that has obscure psycho-babble ones). And it rates you as lovers or friends (or enemies), which makes it REAL clear. The A-list feature that you pay for also allows you to browse anonymously, so if you accidently stumble on your ex's profile, they won't see you've visited (handy if you live in a small area!).

The other cool thing about OKC is that they tell you how often someone responds, so you can avoid -- at least being disappointed by -- people who are just not into the scene, but have a profile. I suggest using a detailed search and narrow your field to fewer people, read through those profiles and put together a nice personalized letter to each of them. A smaller net with thoughtful input will make on-line dating better for everyone.

It didn't ultimately 'work' for me, but I'm pretty pro-OKC. If they turned it from a free into an almost-free site, to cut out the posers, it would truly rock.

Related Articles
OKCupid Reviewed by izook on Mar 28. In general my recommendation is that if you want a free site that you don't go on-line -- people are not as serious on free sites as ones they need to lay down cash for. Rating: 4
Home ›
Reviews ›
Popular ›
OKCupid ›
User Reviews ›
izook