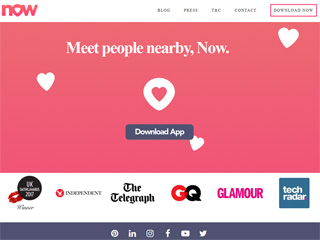 Now is a dating app for meeting, chatting and dating nearby people. It's free to download. You can boost your profile, and chances of meeting someone by purchasing now keys.

Now was launched in 2017 so it's still early days for this app. To signup you have to first download, and then link it to your Facebook account. There doesn't seem to be another way around this so anyone who doesn't have an active Facebook won't be able to get it. 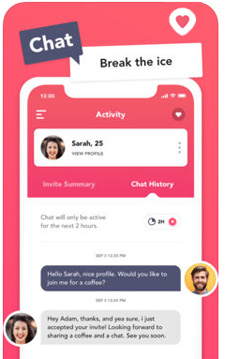 You'll then have a choice to set your profile pictures and enter some interesting facts about yourself. Once you have your profile ready the app lets you set your status depending on your whereabouts and availability to meet others.

Now is all about quick local dates. But it's not a hook up app. People on Now for the most part seem to be after a relationship of some sorts rather than a quick fling.

Now claims that it checks all profiles. This will add a sense of security to anyone worried about being the victim of a dating scam, but of course you have to do your own checks too.

The searching is all pretty simple and anyone who's used other dating apps like Tinder, Bumble or Happn will feel at home.

People who're less active on the app are not suggested as often.

Now will auto suggest people to you using its own criteria and will also match you with what you say on your profile. Those people who're less active on the app are not suggested as often. This way you won't be shown profiles of those who've not logged on for a few months.

The pool of users on Now doesn't appear to be huge. That can make finding nearby dates tricky if you happen to be in an area with fewer people are active. The app will access your phone's GPS if you give the necessary permission. This way you should receive local matches, if they are nearby and are compatible dates with you.

Buying keys will boost your profile's priority when other people are searching.

Most of the Now app is free to use but you can buy some optional extras by subscribing for the premium service. The credits are called keys. Buying keys will boost your profile's priority when other people are searching. This gives you a better chance of meeting someone.

The keys allow you to buy services only as and when you need them. This way you aren't tied into a monthly subscription for services you might not need all of the time.

There's also a free trial for the app called a gold key which will give you full access but only for 60 hours.

Visit Now Dating AppWrite a Review
No ratings yet

Total 0 Ratings
0 Reviews
0 Comments
Rss Feeds. Subscribe to comments for this site. [?] Receive updates about Nowdating.io directly through your newsreader.
Sort By: