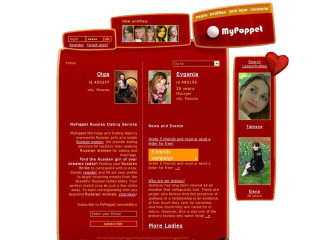 For almost an entire year I thought I was communicating to a beautiful woman who had lips like Angelina Jolie, but I just found out that I was actually talking to a 52-year old male from Afghanistan with a gold tooth!

They use a lot of sales backdrops to get you to drop your guard. For instance, the lady I was supposedly writing to claimed to be religious. Anybody who has sold used cars knows to pull out the Jesus statues when a new buyer is coming. Here's another backdrop they use: They have a disclaimer on the home page that states members are not to promote racial or religious persecution. Well, this would give the average bachelor the strong impression that this is a legitimate organization that doesn't want any trouble. Also, they actually have a phony newsletter supposedly updating the current members about MyPoppet activities. You can tell this is fake by noticing they continue to email the same 2 newsletters over and over again. The text never changes.

I was one of the many suckers that fell for the woman that had the "Angelina Jolie" lips. Her picture is not categorized with the other women's photos. They use her photo and profile like a sniper. If youâ€™re not putting down a credit card to write to any of the posted ladies, then they bring this girl out as a big gun. They don't post the "Angelina" woman along with the others for a reason. Someone who is badly victimized might report the name of this supposed member on a blog like this, so the perpetrator can easily change the female's name this way.

To mention a few other tricks that the fraudster is using: As it came closer to the time we were planning to have my supposed new wife fly over here to the U.S., the fraudster then informed me that "she" has some food allergies that include citrus fruits and is lactose intolerant, so "she" can only drink soy milk. I think you are getting the picture now. Why would any reasonable person doubt these factors as anything, but adding up to more legitimacy.

Here is a mind blower: I remember 6 months into the fraud I had read some of the bad reviews that made me suspicious, but not suspicious enough. Remember, there were phony, but very good reviews about the site placed by the owner himself acting like a client. This fooled me. I continued to take the risk. I didn't want to believe that I could've been hoaxed.

After a few months I decided enough was enough, I had to prove once and for all if this voluptuous woman was real or fake. I demanded she send me a new photo if she wanted to continue the relationship. "She" just stalled and stalled and started writing flowery letters just completely ignoring the issue. And, this was after I purchased her contact info. Oh, and by the way, "she" demonstrated almost the exact behavior described by an irate blogger. She tried to lure me back onto the paid site after I had fully communicated to her by direct email.

You may wonder how I could have been so naive to fall for such an obvious hoax by such an obviously "too good to be true" lady. I'll tell you how I fell for it. I am a good looking California guy with a successful career. I haven't been able to find my soulmate out here where I live since the demographics of this area have changed so drastically in the last 15 years. Here I am, just another Tom Cruise, Brad Pitt or Johnnie Depp looking for a wife in a land where there are no females like myself anymore. It seemed to be very plausible that a young woman who claims from experience that the men in Russia are abusive might want to look to a western man as the answer. Likewise, it seemed plausible that since I live in the entertainment capital of the world where it doesn't even snow in the winter, that such a lifestyle might appeal to a woman who has been locked into a frigid climate 9 months out of the year.

This is why I fell for the fraud!

I happen to be an attorney. I've already submitted a full crime report to the Russian Bureau of Domestic Investigation. They are currently looking into the website and will most likely be throwing this scum behind bars.

MyPoppet Reviewed by Kennx7 on Jul 15. My Poppet is a very very very clever fraud. For almost an entire year I thought I was communicating to a beautiful woman who had lips like Angelina Jolie, but I just found out that I was actually talking to a 52-year old male from Afghanistan with a gold tooth! They use a lot of sales backdrops to get you to drop your guard. Rating: 1
Home ›
Reviews ›
Russian Bride ›
MyPoppet ›
User Reviews ›
Kennx7