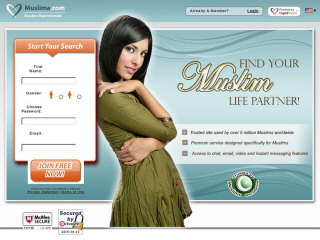 "Muslima - a way of dating/flirting behind a screen?"

As a female on the site, there are some 50/50 males that have profiles stating one thing but when you communicate with them you will be able to establish the true from the untruthful. All sites including Muslim sites have shady characters selling themselves. Females should do their research as some of these men are on non-Muslim sites searching for your imagination to draw its own conclusion. I'm fortunate i have people in positions to check people's background out and just me there has not been a profile i engaged in on Muslima that was not loyal in their words. It's like it is an online modern version of trying to womanise without the world knowing and when a woman doesn't accept the advantages she is called stuck up or too westernised lol. I did not realise self-respect was being westernised or brainwashed but we all have our views. Ladies should be careful many perverts without the intention of marriage and men Iâ€™m not sure if you do your research you will find the site has many fake female profiles both males and females as these pictures are on a con site to watch out. Do your research instead of living on cloud 9, there are some good people but there seems to be a lot of people who don't read your profile and harass you because they like what they see and are not compatible. Charm doesn't work and you may find yourself being one who leaves the site like me unless you play Muslima Barbie with no mind of her own.

Hope it works out for others but do your research as most people on there are not serious. It's a way of dating/flirting and doing it behind a screen, not all are like that but better to be warned before you part with your cash.

Related Articles
Muslima Reviewed by Zara1 on Feb 17. As a female on the site, there are some 50/50 males that have profiles stating one thing but when you communicate with them you will be able to establish the true from the untruthful. Rating: 1
Home ›
Reviews ›
Muslim ›
Muslima ›
User Reviews ›
Zara1