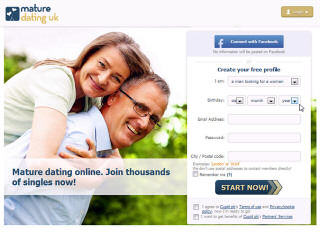 I made the mistake of paying to join this site for 6 months. As soon as I joined I started getting contact from young women under 30 (I am 59). I was surprised at first as I thought this is supposed to be a mature site. It soon became apparent these were not genuine people. I had contact from at least 4 "people", each with 5 or more photos of a sexy looking blonde 22 year old, making it fairly clear what they wanted. It was not very clever as the photos were obviously all of the same person, with some of them identical photos! They had different names and locations of Sheffield, Hereford, Coventry and Southampton. Two of them had exactly the same statement at the beginning. There was also another girl, allegedly 29, with the same words as well. These people are clearly either scammers or prostitutes.

Recently there has been a rash of 31-34 year olds which look similar - glossy studio pictures and very little detail other than the initial statement and pretty open as to what they are offering.

Also a lot of what seem like real people only seem to be older women wanting sex. A very disappointing site and a waste of money if you are seriously looking for a relationship.

Maturedatinguk.com Reviewed by 65looks55 on Jan 3. I made the mistake of paying to join this site for 6 months. As soon as I joined I started getting contact from young women under 30 (I am 59). Rating: 1
Home ›
Reviews ›
Seniors ›
Maturedatinguk.com ›
User Reviews ›
65looks55