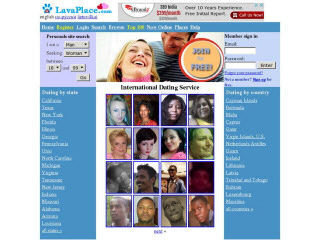 Lava place is an international dating service that's popular with women and men from Eastern and Western Europe, Asia and the United States. This fun-to-use site is free to join, and provides everything you need to get to know other singles in any part of the world.

While LavaPlace isn't the most attractive site, it does have a simple, functional layout that's fairly easy to use. It has an international-feel - and attracts a diverse group of people seeking every type of relationship imaginable.

In order to participate fully on LavaPlace, you will need to have an active profile. There are four pages of information to complete - and if you don't have a photo you'll be prompted to upload one each time you attempt to view someone else's details. This does become annoying after a while, so I would suggest uploading at least one photo - note however that the site has a policy of banning people who upload fake or inappropriate photos.

Free account holders can only communicate with fully paid members.

Assuming you've got past the profile creation steps, using the site is pretty self-explanatory. There are three levels of search: the first being a basic user search, the second a word search, and the third is an advanced search where you can enter more specific details such your ideal person's appearance, where they live, their language ability, zodiac and their family status. It's also possible to save searches for later retrieval.

LavaPlace is typical of other dating services having basic matchmaking, e-flirts, emailing, live chat, and picture voting. The forums (called Places) are especially helpful for connecting with others and one can find people looking for travel companions, adventure holiday partners or just pen-pals. You can also see who's viewed or saved your profile as well as those who've voted your photos (7 or higher - called sympathies).

Joining LavaPlace.com is free, although you will need to upgrade to a paid membership to access the full range of features and tools on the website - including full email and chat access. Paid members can communicate with anyone on the site, while basic (free) account holders can only communicate with fully paid members. Men may find that this restricts their access since many on the site (especially females) appear to be using free accounts.

In addition to communication privileges, paid members also appear first in searches and are able to access all photos (including private, naughty photos which are blocked to free users).

A paid subscriptions start at $29.99 per month. This is reasonably priced when you consider the number of people on the site as well as the range of features it offers.

LavaPlace has a diverse group of members including many from Eastern Europe. For this reason it is especially suited to those who are open to international relationships. Whether you want to make foreign friends, chat and flirt, or pursue something more serious there are members there with whom you can connect.

Total 5 Ratings
0 Reviews
5 Comments
Rss Feeds. Subscribe to comments for this site. [?] Receive updates about Lavaplace.com directly through your newsreader.
Sort By: Filter By: Rating:
Sort By:

LavaPlace.com 1.6 5 A review of LavaPlace.com. Lava place is an international dating service that's popular with women and men from Eastern and Western Europe, Asia and the United States.
Home ›
Reviews ›
Chat and Flirt ›
LavaPlace.com