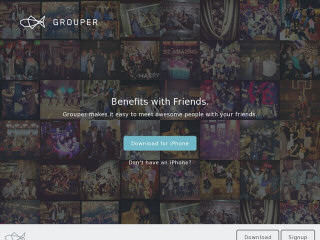 Grouper.com uses your Facebook account to create group dating events between people you know and people you don't. The matching is all done behind the scenes

Grouper.com follows the trend of modern online dating where you don't have to fill in long and tedious questionnaires about your personality and likes and dislikes. Grouper simply hooks into your Facebook account and pulls together your friends and friends of friends. From that, it works out what kind or person you are, who you like to hang out with and so on. At least that's the idea.

Grouper doesn't simply match you with someone who you've already friended. The idea is it reaches further out to find connections between people you don't know. Once you join by adding the Facebook app, the matching is all done behind the scenes. There's nothing more to do other than simply wait to receive suggestions about people you can group date with, and the meeting venue.

Grouper is good for those too shy to go on dates on their own and who prefer having a few friends along for comfort.

Crucially, the difference is Grouper doesn't arrange one-on-one dates. They are group dates, so you will be grouped with a couple of your friends and three total strangers. This might seem rather bizarre to people who're used to dating being a private thing between two individuals. Not so Grouper tells us. It's all about the social angle, and getting people to mingle outside of their social circle.


For some people, the idea of going on a group-group date, where you already know half the people is appealing because you have the comfort of friends being around you. It also means there's less pressure to make romantic moves because it's just a gathering of friends. Grouper is definitely not for everyone though.

Grouper is kind of an unusual mix between a speed dating event and having a regular date with someone you've met online. I don't think it's everyone's cup of tea, but I guess it will appeal to people who are a bit too shy to go on dates on their own and prefer having a few friends along for comfort. This is possibly why the service is far more popular among women than men.

Visit GrouperWrite a Review
No ratings yet

Total 0 Ratings
0 Reviews
0 Comments
Rss Feeds. Subscribe to comments for this site. [?] Receive updates about Joingrouper.com directly through your newsreader.
Sort By: