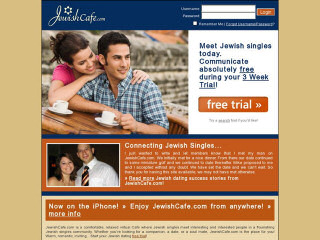 "My expeprience with Jewish Cafe"

I joined Jewish Cafe some years ago, and was contacted by several men; I also contacted some. None actually worked out, but things worked smoothly as far as getting mail was concerned. I am in an age group that is very sparsely represented, (70-80) and after a week or so, I stopped getting mail, and new members that showed up were not in my age group. I gave up for a while, because I was working on a time-consuming project that left me with no
spare time.
Just recently, I re-joined for two free weeks; contacted three people and only one wrote me back. He wrote during the two week free period. I am disappointed but hopeful. But it really is luck. I don't think the management is that hard up for members that they would hold mail, as one reviewer said.

I subscribed for a short time. Wish me luck
Mosaic