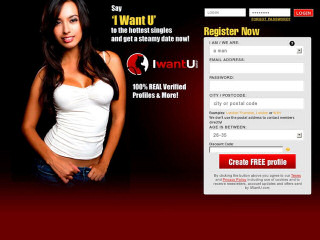 I am currently a VIP member at IWantU. It costs nearly $60 for the 3 month VIP package that I purchased. The site also offers a token deal that allows users to pay as they go for things such as reading mail and looking at others profiles but this can end up getting very expensive for active users. Overall, my experience with IWantU has been mostly negative with only a couple good aspects.

Here are the bad points of IWantU.com that I've experienced. First of all, customer support at IWantU is non-existent. It takes at least a week, sometimes weeks, to get your profile approved. As a VIP member, paying 17.99 a month, I would expect faster service but the first two weeks I spent as a paying member I had no profile description, only a photo. I sent customer support a ticket that still hasnâ€™t been answered in nearly a month. Because of this slow response to updating people's profiles and approving new member profiles, there are many people on the site that have nothing more for profiles than a message that says "pending approval". This leads me to my next negative.

Like a few other adult sites I've tried, it appears there are many amazing women that wish to contact you on the site but many of them are scammers while others are cam girls. I do get multiple messages and "WantU's" each day, but often times it's the exact same message from "different" women.

Other negatives to the site involve more of the technical side. Their "Aphrodite" matching system is confusing and is likely broke. I have never returned a match, no matter how I set the preferences, through it. The "search profile" engine has problems as well; it makes no difference what I do. I keep returning the same profiles. Finally, the chatrooms (at least the lobby chat room) is out of date. The chat page constantly refreshes, making conversation very slow and difficult to follow.

Another major negative about the site is that, even as a paying VIP member, standard users cannot read the messages I send them unless they are willing to purchase tokens or become a VIP member themselves. My messages just sit in their mailbox and they are unable to read them. Also, standard members cannot look at other people's full profiles without paying either. Most of the members on the site are standard members so this limits communication greatly.

There are a couple good things about IWantU though. Although there are many fakes on this site, there are some hot women hidden out there amongst the scammers and cam girls. Sometimes it takes some effort to find them but I have spoken with some real women and have made a few friends here. I do get at least a few messages each day but, as I said, many of them are coming from people with suspicious profiles or the message itself sounds like itâ€™s been copy+pasted by someone who has little grasp of the English language. Guys have to use some common sense and a healthy bit of skepticism when using this site IMO.

There is a nice, small, community of people in the lobby chat room that seem to enjoy just chatting about general small talk things. They were helpful when I asked them about their experiences with the site but, while they were a nice part of my time there, I did not come to IWantU to chat about sports or the weather.

Like most men who come to adult sites, I signed up to meet women from the area to eventually meet in person. Most of us understand that it takes some time to send out messages, sort through the fakes, and develop a rapport with others over the internet and we don't mind the investment if we have a chance of actually meeting someone. But, as far as IWantU goes, Iâ€™ve had better luck meeting women on MySpace. Once you add in the fact that their customer service is terrible, I would not recommend "IWantU" to anyone.

IWantU.com Reviewed by MMarshall on Jun 13. I am currently a VIP member at IWantU. It costs nearly $60 for the 3 month VIP package that I purchased. The site also offers a token deal that allows users to pay as they go for things such as reading mail and looking at others profiles but this can end up getting very expensive for active users. Rating: 2
Home ›
Reviews ›
General ›
IWantU.com ›
User Reviews ›
MMarshall