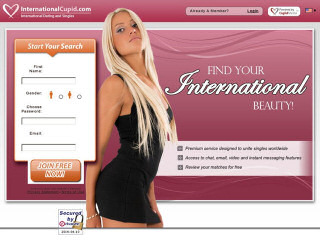 My experience with InternationalCupid.com has been disappointing, to say the least. The problem with the site is that about half of the women whose profiles you see are scammers of one sort or another. Some are obviously prostitutes, many are obviously involved in organised crime.

For example, several of the Russian women who contacted me not only asked to go off-site right away, but initially claimed to be from Canada or the US, only to magically turn up in Russia the moment contact was established.

Several of the Russian women I contacted claimed to be nurses. The moment we went off-site together, they automatically began sending me high-end, airbrushed, professional studio-quality photos of themselves, most often provacatively posed, and wearing very little. One of the women in question was holding a purebred cat worth around $500.

Now, I happen to know that a Russian nurse makes around $100-$125 per month, and could never afford the opulent places in the backgrounds of those photos, the photo sessions, the photos, or a $500 cat. Many of these girls also claim to travel widely, and when they want to meet you, suggest meeting up in some pretty posh locations. Again, no Russian nurse can afford to be a high-end jetsetter.

I have a keen eye for this type of deception, as I once worked as a volunteer counsellor for prostitutes and drug-addicts, and drove cab part-time in several big cities. If I were to go through InternationalCupid.com's entire compilation of profiles and delete the scammers (I'm just referring to the women, here), I can tell you right now that at least half of them would go, and quite possibly a fair bit more than half.

Related Articles
InternationalCupid Reviewed by gsmonks on Aug 19. My experience with InternationalCupid.com has been disappointing, to say the least. The problem with the site is that about half of the women whose profiles you see are scammers of one sort or another. Rating: 1
Home ›
Reviews ›
Foreign Bride ›
InternationalCupid ›
User Reviews ›
gsmonks