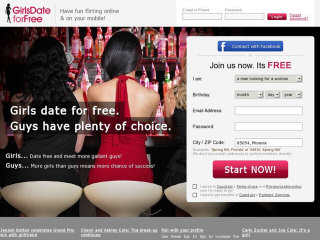 Within 36 hours of logging on to this site, I was accosted by 30 fake accounts purporting to be single women that were basically scammers. The texts requests and e-mails from fake accounts came so fast that it made the bad user interface and cumbersome mailbox even more annoying. No women posted anything in their files and simply had lame come-ons asking to save them or hit them up or whatever. One scammer sent me 12 text chat requests in a period of five minutes before I Blocked them. GirlsDateforFree is a scam and a joke, in my opinion. I feel sorry for un-savvy guys that get hooked on the tactics used there, because it just prays on the weak. Oh yeah, and canceling? Holy cow! They make you call a number and give the operator a 9-digit code so you can have the pleasure of having them try to sell you an upgrade before they grace you with cancellation of your poorly-spent scratch. It's annoying from beginning to end, the experience with these guys.

My suggestion is that if you want a free site, that you don't go on-line because people are not serious on free sites. However, if you're really committed to the idea and you are really looking for people who are interested in dating, I've found OKCupid to be pretty decent. I don't receive any compensation from them for saying so; I have had an account for several months and found some cool people on there (who, obviously, I didn't match with or I wouldn't be browsing other sites, but maybe you'll have better luck.

Another free site is PlentyOfFish (POF) which is OK but just OK. Really hard to get anyone to respond; I think people just go on there to look. Thus my distrust of free sites. Money motivates people, so if they're payin' they're stayin.

GirlsDateforFree Reviewed by izook on Mar 28. Within 36 hours of logging on to this site, I was accosted by 30 fake accounts purporting to be single women that were basically scammers. Rating: 1
Home ›
Reviews ›
Free ›
GirlsDateforFree ›
User Reviews ›
izook