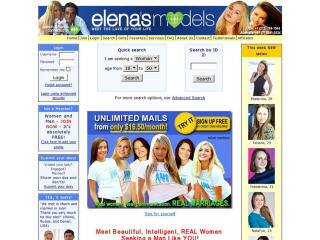 ElenasModels is a marriage agency that's been around since 1999. They offer matchmaking and introductions of Russian, Ukrainian and Eastern European ladies to sincere men. They pride themselves on the beauty of their many female members.

Elena's Models is an agency that exists in a special niche in the world of foreign marriage and matchmaking:

They help in setting up relationships between (usually Western) men and Russian and Eastern European women.

ElenasModels serves a need that seems to exist among many men in the West: the loneliness that results from the lack of a stable system of values.

The website has a friendly layout. You can use the service either at their main web site or on one of their phone apps.

They offer men a choice of three membership packages. Starting at the most basic you'll be allowed to send up to 50 emails to women of your choice. With either platinum or ultimate, these limits are lifted and you can make as many contacts as you want.

Each profile has a decent amount of information and most have high quality pictures. Some girls allow video and text chat so you can speak to them immediately if they're online. Importantly each profile lists the girl's response rate so you'll have an idea of how likely it is you'll get a reply.

Elena's Models is a site that gives men the opportunity to become acquainted with similarly questioning--and lonely--Russian and Eastern European women.

For those wishing to join, the minimum subscription lasts for 6 months, at a cost of $228.00

Total 1 Ratings
1 Reviews
0 Comments
Rss Feeds. Subscribe to comments for this site. [?] Receive updates about Elenasmodels.com directly through your newsreader.

Elenas Models 4 1 A review of Elenas Models. ElenasModels is a marriage agency that's been around since 1999. They offer matchmaking and introductions of Russian, Ukrainian and Eastern European ladies to sincere men.
Home ›
Reviews ›
Russian Bride ›
Elenas Models