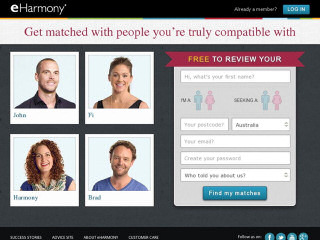 eHarmony has launched its proven and successful matchmaking website to Aussie Singles. They send "pre-screened" matches, who are compatible with your personality type on the most important levels. eHarmony has a long track record of success with millions of married couples as living proof of their scientific approach to matchmaking.

eHarmony has had a lot of success in the US, and UK with their patented compatibility matching. Instead of you choosing people you're interested in, you take their personality quiz, and they match you with other singles who match you in terms of compatibility.

Depending on how you feel about personality tests, eHarmony can either be enjoyable or feel a bit intrusive

eHarmony uses the same formula as it uses on it's other sites. You start off by filling in a lengthy personality test. This takes about 20 to 40 minutes. This process can either be enjoyable or feel a bit intrusive. This will depend on how you feel about questions that are designed to probe your inner feelings and to discover your personality type.

A small number of people are turned away from eHarmony based on the relationship test.

Once you complete the test you'll be able to go straight in and check your matches.

A small number of people are turned away at this stage. eHarmony is a matchmaking site, and if your results suggest that it would be hard for them to match you with someone, you will probably get turned away. On the plus side they won't take your money unless they think they can find you someone.

Once you get in, you should get at least 10 matches per week - but this will depend on how many preferences you've set.

eHarmony has made a number of changes thanks to some feedback, not all of it positive. The entire process is now quicker and more flexible.

Paying members will get more matches. They also have the ability to search beyond those people they've been "officially matched with".

Communication between members is now much less controlled than it was, thanks to the improvements.

The site is still geared toward people looking for a long term partner. But now you'll have much more freedom to chat directly with your matches without going through their "guided communication" which often felt a bit like a straight jacket to natural conversation.

Although you can join eHarmony for free and review matches, the questionnaire is pretty long, so you may not want to invest the time just to review matches without being able to make contact.

Keep in mind that the Australian site doesn't have the enormous number of members that the US site does. Those in big cities like Perth or Sydney won't have a problem but you might find things difficult if you're in a remote area.

Total 5 Ratings
0 Reviews
5 Comments
Rss Feeds. Subscribe to comments for this site. [?] Receive updates about Eharmony.com.au directly through your newsreader.
Sort By: Filter By: Rating:
Sort By:

Related Articles
eHarmony Australia 3.4 5 A review of eHarmony Australia. eHarmony has launched its proven and successful matchmaking website to Aussie Singles. They send "pre-screened" matches, who are compatible with your personality type on the most important levels.
Home ›
Reviews ›
Australian ›
eHarmony Australia