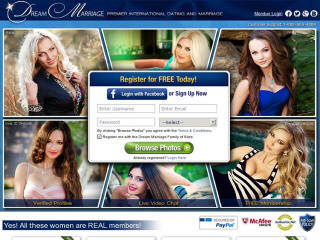 I tried the website for 2 months. There are probably legitimate women looking for a husband on it, but the figurative â€œminefieldâ€ of dishonest women is too great to overcome, without sheer dumb luck and huge expense. Plus, from what I've read and learned, you may not be able to trust the translators and what they are telling you and the girl you are chatting with. And, with two folks working against us poor guys, the chances of a scam really seemed to increase with the participation of a human translator. So, I decided to only chat with women whose profiles indicated they knew some English. And, I also adopted the tactic of not being willing to chat with any women who were physically located at an agency office at the time; hence, fewer translators to deal with. I would ask the girls, and in webcam itâ€™s easy to tell if they are at home or at what looks like a bank of computers for the purpose of anyone can guess. HaHa!

I participated on the site on the basis I was not willing come to the Ukraine for a first meeting, but rather in Europe, and her costs to get there I would pay. The idea being if a woman is not serious, she isn't going to be willing to do that, and I found that true. Lots of sad tales about hard to get visas (toss that profile in the cactus patch! HaHaHa!), and I solved that problem with a travel agency in Kiev, which has no problem getting visas for Ukrainian women to travel to Europe, and no big extra cost either. So, I always provided the women I was interested in with that information and url link. I told them my requirements up-front. I developed my own requirements that I felt would help me properly vet the sincere women from the possible scammers. And, I concluded there are too many of the latter to continue on the site. It will eat your money if you let it. I sort of feel sorry for any of the good women there, since all the others are ruining the site for any good men they might hope to find on it. I feel even sorrier for the men who were emotionally or financially abused by it. I found it a fun project I did not mind paying for.

I have one final comment. A curious event happened the day after I quit the site. The debit card I was using on the site began experiencing fraudulent purchases that totaled over $1,000 in less than 24 hours. I got my money back, so no harm, and was alerted to the fraudulent purchases the very same day they started, good thing to deal with a great bank. Itâ€™s impossible to prove the website or agency had anything to do with the debit card fraud, and I am not saying they did. But, it certainly was an interesting coincidence.

I gave the site one star out of requirement. I personally think in addition to the 5 stars this site offers, they should considering adding five skull and crossbones icons! HaHaHa! Be a more accurate way to give a good rating to some sites than using stars.

Dream Marriage Reviewed by Clique777 on Aug 12. I tried the website for 2 months. There are probably legitimate women looking for a husband on it, but the figurative â€œminefieldâ€ of dishonest women is too great to overcome, without sheer dumb luck and huge expense. Rating: 1
Home ›
Reviews ›
Russian Bride ›
Dream Marriage ›
User Reviews ›
Clique777