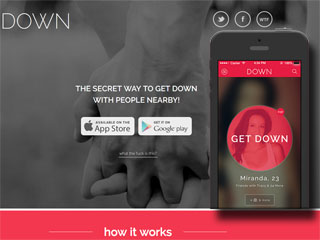 If you're looking for a more racy version of Tinder then Down Dating app could be your thing. Down will suit you if you just want quick, casual hookups. Nothing more, nothing less.

Down doesn't pretend to be anything more than a hookup app. They've changed from the old in-your-face name "bang with friends" to the more respectable Down Dating back in 2013.

Everyone is pretty clear from the start what this app is about. Hopefully there shouldn't be any misunderstandings. 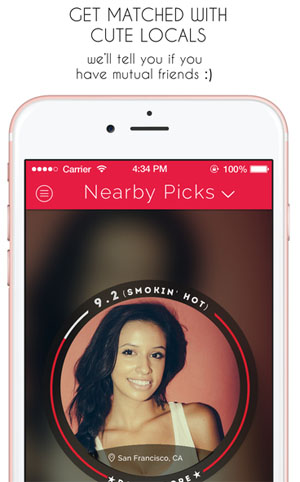 Down's matching works on mutual interest. You're shown a selection of profiles from your extended circle of friends (see below) and then you can swipe to like a person as you choose.

Down will only ever match you with someone who's also swiped to like you as well. Once mutual interest is established, you'll see a notification to say the person you are interested in is also interested in you. You'll then have the ability to message them and arrange a date.

Down will match you with anyone in your extended Facebook circle of friends.

There is a basic setting for relationship preference. You can select either to "get down" or get "a date". Though to be honest I didn't see much difference, at least from the sorts of matches I was getting. However this will depend on your preferences and your social network.

There is a verification feature to get you into the app - this means you have to link it into your Facebook page. Down says that this process is entirely anonymous; They won't post to your page.

Down will match you with anyone in your extended circle of friends - friends of friends and the like - even if they aren't on the app.

If they aren't on the app they'll get a notification to join and a message saying someone likes them - but they'll only see you if they do join and show an interest in you as well. So it is almost entirely anonymous.

Linking via Facebook does cut down on some of the bogus users.

People will only ever see the information you make accessible to them. So nobody can see you're on there unless they also have a profile and have expressed an interest in you.

Linking via Facebook does cut down on some of the bogus users. Even so, when meeting some new it's wise to take caution and not take anything at face value.

Down Dating is good if you just want to get it on with nearby people. It's a way to look for casual hookups with people around you. The premium version will unlock some additional features and let you see more people.

If you've had a good time you can tell others about it in the "happy endings" blog - provided your date agrees of course!

Visit Down DatingWrite a Review
No ratings yet

Total 0 Ratings
0 Reviews
0 Comments
Rss Feeds. Subscribe to comments for this site. [?] Receive updates about Downapp.com directly through your newsreader.
Sort By: