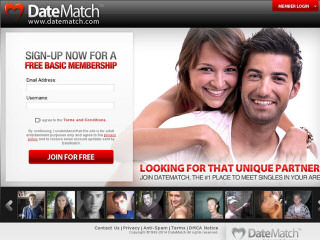 DateMatch is for anyone seeking online flirting, casual dating and hook-ups. It's a site for the younger crowd but is fairly small with just a handful of members. Upgrades start at $29.99 per month.

DateMatch is for anyone looking for something a little more steamy than mainstream dating sites.

DateMatch has many of the features of traditional sites catering to people looking for a long term match. But mostly people are there are looking for casual encounters.

The main disappointment on DateMatch is the lack of activity. While I found a lot of profiles, many seem to be no longer active or responding to messages. The site's members seem to be primarily in their 20's.

With a free membership, you can search and browse. But to send email, or initiate contact with a member in any other way besides a "wink", you'll need a premium membership.

As a free members they let you upload a photo to your profile. This can increase the chances of being contacted by someone. A paid membership will allow you to use the video, audio and text chat rooms, upload more pictures and initiate real contact with other members via instant messaging or email.

This site is very easy to use and pretty up front about the fact that it's geared more toward casual intimate encounters than finding a mate. The real problem though is lack of any real activity there - which is the "Achilles heel" for any dating site. For a better experience I suggest going elsewhere.

Total 1 Ratings
1 Reviews
0 Comments
Rss Feeds. Subscribe to comments for this site. [?] Receive updates about Datematch.com directly through your newsreader.

DateMatch.com 4 1 A review of DateMatch.com. DateMatch is for anyone seeking online flirting, casual dating and hook-ups. It's a site for the younger crowd but is fairly small with just a handful of members. Upgrades start at $29.99 per month.
Home ›
Reviews ›
Adult ›
DateMatch.com