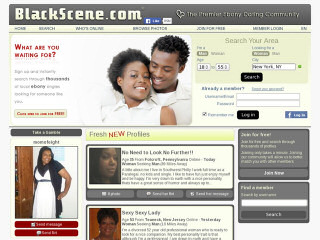 BlackScene.com is for African Americans as well as people of African descent living anywhere. This site, which calls itself the "premier ebony dating community" is a popular hang out for people of African origin looking to connect romantically with others of their ethnicity.

BlackScene is a dating site for African Americans or anyone who wants to meet them.

Most BlackScene members seem to be in the US, UK, Ireland, Australia, Canada, South Africa. A few are from Scandinavian countries but there are people from other countries too. This is a good choice for people of African descent looking for romance with someone of their ethnicity - but there are others.

Inside I found it fairly quiet with not a good deal of activity compared to BlackPlanet or AfroIntroductions. What they offer is fairly standard. Once you create your own personal profile page, you can begin searching for friends, dates and other connections.

You can go there for dating, romance or anything in between. It caters for all sexual orientations, straight, gay, lesbian and bi.

If you're the kind of person who's typically uncomfortable talking to large groups of strangers in bars or at other massive social events, it might suit you. It is a smallish site, but for some this can be an advantage. It's not as intimidating as the bigger places. Plus you're not likely to bump into your next door neighbor or your boss!

Basic membership is free, and people can create a personal profile and start browsing through hundreds of other members' profiles within minutes of signing up. Basic membership lets users upload photographs of themselves to accompany their descriptions.

Because it's small, you're not likely to bump into your next door neighbor or your boss!

The profiles of basic users will be accessible to other basic users as well as to upgraded users. Upgraded accounts allow for a myriad of additional features, including public and private chatrooms, instant messaging, and access to special upgraded-members-only forums.

Upgraded members can also send one another virtual "flirts" - exciting and jaunty ways to indicate romantic interest in a potential partner.

Total 1 Ratings
1 Reviews
0 Comments
Rss Feeds. Subscribe to comments for this site. [?] Receive updates about Blackscene.com directly through your newsreader.