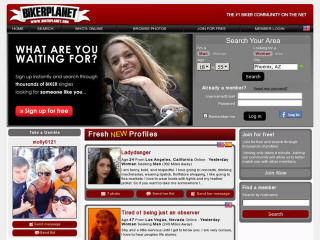 I joined Biker Planet about 4 years ago, then due to health issues and other reasons, I let my subscription lapse. Then in the middle of Aug. of 2011 I decided to re-new and join up again for a month. I used a debit card. Payment went through fineâ€¦ screen flickered and then went to a second payment site, one with European roots/connections. I was active for a couple of days. Then 2 days go by and I go back to the site, and I notified that my account was closed at my request, which I had not done. I wrote an inquiry explaining that I had not made such a request, also asked if their payment facility was European in origin. Shortly thereafter, I received a response from the "Customer Service Dept" stating that the "Fraud investigating dept." gave no reason, but they are the ones that made a decision to shut down my account.

I wrote a second inquiry telling them I had bank records indicating a debit from my account less than a week ago for one month's subscription to their website and I wanted either a better explanation and my money back or reinstatement of my account...I have yet to receive an answer. I did also tell them if they did not comply with my request I would report them for fraud!

BikerPlanet Reviewed by stevemike35 on Aug 16. I joined Biker Planet about 4 years ago, then due to health issues and other reasons, I let my subscription lapse. Then in the middle of Aug. Rating: 5
Home ›
Reviews ›
Alternative Lifestyle ›
BikerPlanet ›
User Reviews ›
stevemike35