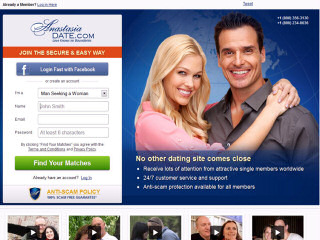 "I've been on Anastasia for a number of months"

I have been on Anastasia for a number of months and I have been thoroughly displeased with their alleged services. The sole purpose of this company appears to be separating its clients from large amounts of cash. Their video chat system is abysmal and very expensive. You must pay in advance, and they refuse to ever make refunds when the system fails. The instant messaging system is very slow and often fails. They ignore complaints for a simple and obvious reason. They charge by the minute, so the slower the system works, the more money they make. I have met a number of women face to face and I must say that most of the photos are so heavily photo shopped that the women do not resemble their photos. I cannot prove fraud, but I strongly suspect it. Many of the women lead you on in many conversations, talking about how they can't wait to meet you, but when you buy the ticket they are suddenly going out of town or you have not known them long enough. Since the same excuses are used over and over again, they are obviously hogwash. It would appear these young women have been paid to keep you talking...and paying.....and then cut you off when you actually want to meet.

I do not mean to suggest that there are no sincere women on Anastasia. There are many and many are truly beautiful. Yes, there are young women who genuinely want mature American men. But like us, these women are victims of a system that views them as a commodity. I have seen no indication that Anastasia is actually interested in creating matches and I would be exceptionally careful in dealing with them. And do not fall prey to the idea that the grass is greener on the other side of the fence. When you find a nice girl, stick with her, and don't insist on the most beautiful. Insist on the smartest and most sincere.

Related Articles
AnastasiaDate.com Reviewed by John1 on Jun 30. I have been on Anastasia for a number of months and I have been thoroughly displeased with their alleged services. The sole purpose of this company appears to be separating its clients from large amounts of cash. Rating: 1
Home ›
Reviews ›
Russian Bride ›
AnastasiaDate.com ›
User Reviews ›
John1